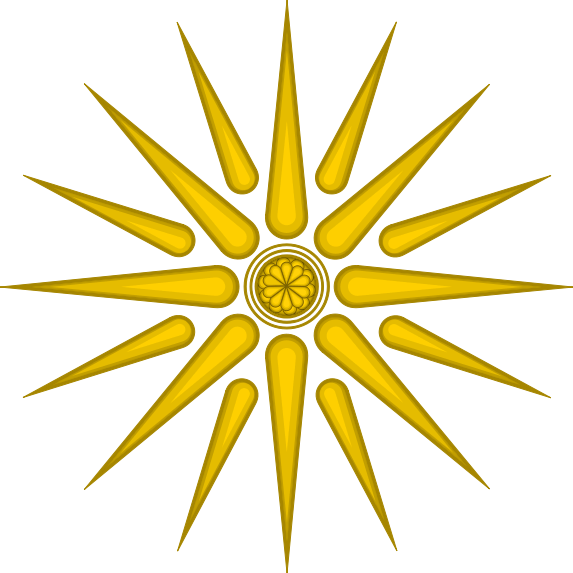 The CIA has been commonly referred to as the ‘Catholic Intelligence Agency’ due to all of the Catholic members in lead positions throughout the intelligence community – but that’s just the sugar coated explanation. Let us uncover the more esoteric connections unknown to the general public until now. The symbol on the CIA shield is known as the Vergina Sun.

The Vergina Sun is formed by sixteen triangular rays which radiate into a 16-pointed star. The symbol was found on ancient Macedonian army shields as well as on the tomb (shown on the Golden Funerary Casket – image above) of Greek King Philip II of Macedon, the father of Alexander the Great III who conquered all of ‘the known world’.

But that’s not the only place you will find it – this symbol of sun worship is displayed very prominently on the Catholic monstrance premiered by the Pope headquartered at Vatican City (image on the left).

The monstrance features the Vergina Sun (note it’s 16 points) as well as a symbol of fertility in its central point of focus – the crescent moon (a symbol highly prevalent in the culture and religion of Islam). The Roman Catholic church has also been found to have this symbol of sun worship and fertility on their altars. Altars are used for offerings

► Are they offering worship to the same spiritual entity that helped Alexander the Great conquer the world?  Why does the CIA and Roman Catholic church have so much influence and power on this earth?

► Why is the Vergina Sun displayed as the emblem of the shield for the CIA?

Is there a darker, more spiritual side to the motives behind the CIA and their surveillance over the mass population? Absolutely. Let’s uncover all of it in this presentation with the rawest empirical data you will ever see revealing the best-kept secrets of the CIA.

Follow The Light In The Dark Place on WordPress.com